As a spice that has been traded by Sri Lanka for centuries, Ceylon Cinnamon seems to be the natural food flavouring ingredient that has definitely won the hearts of many food lovers all around the world. The golden-brown barks goes through a process which is carefully handled by the hands of Sri Lankan families who seems to have mastered the art come out as quills/sticks stuffed with fine layers of Ceylon Cinnamon.

In an era where artificial food flavouring agents have got the negative image they should be getting, Ceylon Cinnamon has become the popular ingredient that avoids health hazards restoring a healthy human body.

The richness of the mild and delicate flavour of Ceylon Cinnamon along with it’s mesmerizing aroma makes it the most preferred natural flavouring ingredient (even by doctors) widely used for:

Due to the abundance of powerful antioxidants, Cinnamon is the clear winner among even superfood providing heaps of health benefits, and we’re pretty much sure that a lot more is yet to be found out by future research!

So a few of these health benefits are that Cinnamon:

Among the many types of Cinnamon in the world, Ceylon Cinnamon has gained its reputation for having its own distinctive characteristics hence making it the superior variety which is found only in Sri Lanka. It has also been a medically highlighted fact that it is safer and healthier due to lower coumarine levels.

This being the reason why Ceylon Cinnamon is known as the “True” Cinnamon or “Real” Cinnamon, one can write a book about the natural spice gifted by nature as there’s so many reasons that makes it priceless.

Ceylon Cinnamon is now in the register of Protected Designations of Origin and Protected Geographical Indications (PGI) published in the Official Journal of the European Union.

So if you’re thinking about sprinkling some Cinnamon to your food, make sure you buy the Ceylon Cinnamon to make no regrets!

These are some notes we want to add here about what we sell through KAgroo. 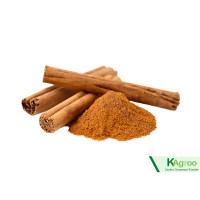